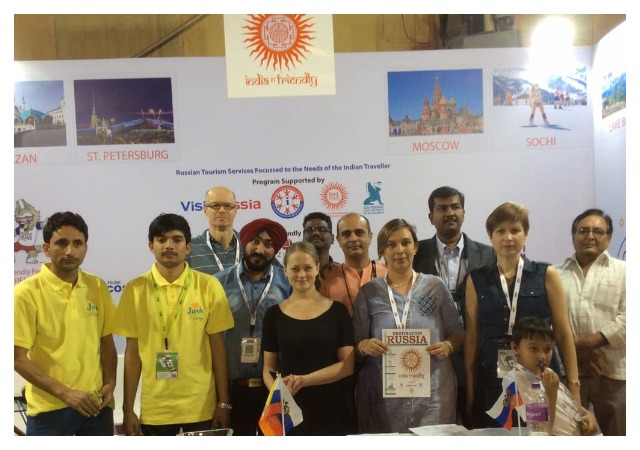 On January 18-20, Mumbai hosted OTM 2018, India's largest B2B outbound tourism event. The exhibition was attended by more than 60 countries, 1000 travel companies. About 15 000 people visited the exhibition in 3 days. The stand " Iindia Friendly" - tourist services in Russia tuned to the needs of Indian travelers attracted special attention. Only for the first day, the stand was visited by more than 1000 representatives of tourist companies in India. Travel Agents showed interest in the program, stressing that Russia was the first country in Europe to pay attention and listen to the needs of Indians. Russian Information Center in India (the developer of the program), conducted a survey of representatives of the Indian tourist industry, and the question – what is most important for tourists from India – 90% of respondents answered-Indian food, in second place was hospitality.

Rajiv Dastane, Director of a&B tours from Delhi, noted: "I have been engaged in outbound tourism for more than 15 years, and I can say that such a program is extremely necessary. My clients go to different countries, but the first thing they ask when choosing a holiday destination is whether there is Indian cuisine there. We know that in Moscow and St. Petersburg there are several Indian restaurants, because these two directions are already quite well studied by us, but other regions of Russia will have a chance to attract our tourists only if they provide Indian cuisine»

Rajesh Vira, Director of Jash Holidays from Mumbai: "I have been sending groups to Russia for a long time, and before the India Friendly program, we had to spend a lot of time on transfers to Indian restaurants, now we can spend this time on excursions or shopping, organizing dinner right in the hotel where we will live. There is another plus - Indians like to dine after 21-00, so the hotel is much more convenient to do"

Paresh Navani, head of the Russian Information Center in India, said: "the growth Rate of tourists from India to Russia is now the largest of all destinations in Europe-it is 38% per year. We expect this trend to continue. In absolute terms, this number is still small-about 100,000 tourists a year, but I think within two or three years, this figure will approach 300,000. For example, Switzerland, France, the United States receives more than half a million Indians a year, and I believe that Russia, with its tourism potential, has every chance to enter the top five tourist destinations. Everything goes to this: if you look at the stands of travel companies in India, presented at this exhibition, it is this year, almost everywhere there are tours to Russia»

Anna skobeltsyna, India Friendly program coordinator in Russia: "I am glad that many of the visitors to our stand were interested in where else to go in Russia, except Moscow and St. Petersburg. Apart from the two capitals, Kazan and Sochi have already become regions of the India Friendly program and were widely represented at our stand. In the spring of 2018, we have planned promotional tours to these regions, and agents actively signed up as participants. Among the tourist products presented at the stand, of particular interest were: tours to the bikini festival in Krasnaya Polyana on April 1, cruises on the Volga and St. Petersburg cruises.Peter Line with departure and arrival from St. Petersburg. The geography of our program is expanding, and in 2018 it is planned to connect Tver, Crimea, Yekaterinburg and other regions. I also want to note that every second visitor to the stand was interested in the 2018 FIFA world Cup, and despite the fact that in India football is not the number one sport, we expect a large flow to this event»

The interest in the Indian market from other countries says a lot: the increase in the number of international flights from India in 2017 compared to 2016 doubled and amounted to-at Mumbai airport 9.1%, Delhi-11.9%. Several new carriers from Russia and CIS countries have plans to launch a direct connection between India and Russia in 2018. Armenia and Belarus have launched a visa-free program for Indians, while Kazakhstan and Uzbekistan have significantly simplified the procedure for obtaining visas.

On January 19, OTM 2018 hosted a presentation of the India Friednly program, attended by Indian tour operators and the press. Presented the regions of Russia, the hotels participating in the program. Valeria Sorokina, head of tourism development Department of the route network of the criminal code of the Russian Regions presented the tourist potential of Yekaterinburg. As the guest of honor, the opening speech was made by Roman Petrovich Skoroy-President of the "National Tourist Union", former Deputy head of the Federal Agency for tourism.

India Friendly in Russia program was launched in 2016, with the support of the Russian Information Center in India, Visit Russia-national tourist office, St. Petersburg State University of Economics, and is aimed at increasing the tourist flow from India to Russia.