On foot from Russia to India in the footsteps of Afanasy Nikitin, 100 days with the support of the Russian InfoCenter 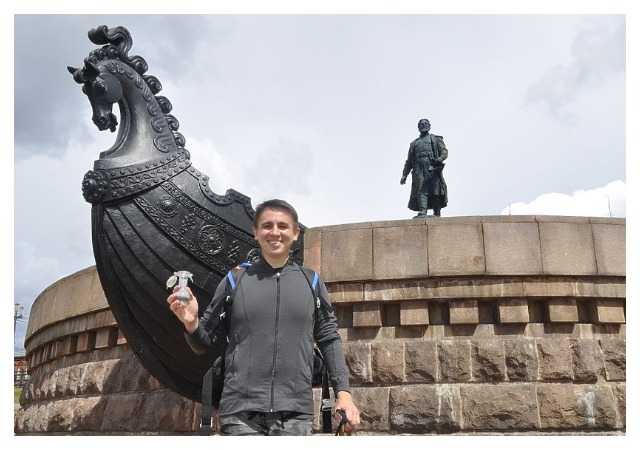 On July 5, 2019 Evgeny Kutuzov started on foot (about 9200 km one way) from Tver to India in the foot steps of the Russian traveler Afanasy Nikitin who reached India around 1467, Evegny also raises money along the way for the rehabilitation of children with cerebral palsy.

"With my travels, I always tried to attract attention to charity, to use any media occasion for good, and not for the sake of self-promotion or hype. I always strive for results, tangible help to other people. During my trip, we closed the fundraiser for two children. Vadim and Timur are already undergoing rehabilitation (Vadim still has surgery). Now they will have a real chance to make the first independent steps in life.

In addition, I would like to remind my compatriots about the great Russian traveler and discoverer – Afanasy Nikitin, whom many have already forgotten,  schools have stopped to teach his tory, and whose book is almost nowhere to buy.

When I left Tver, I took with me some earth, which I collected at the monument of Afanasy Nikitin. The fact is that last year Indian bikers did the same thing – they collected land from a similar monument in India and brought it to Tver and Feodosia. This act was timed to the great anniversary – the 550th anniversary of the departure of Afanasy Nikitin  By the way, this year was also the 530th anniversary of the manuscript, his book “Journey Beyond Three Seas” I thought it was a beautiful gesture that can unite our stories.". - Eugene says.

A couple of weeks later, the Russian Information Center in Mumbai (RIC), which for several years in memory of Afanasiy Nikitin organizes motorcycle tours for Indian bikers in Russia, found Eugene and offered support. Necessary tourist equipment for travel and warm clothes were purchased, souvenirs were produced.

The story of his hundred day journey from Tver to Volgograd Russian Information Center published on the website www.russinfo.in, and translated it into English so that as many people as possible from all over the world would know about this journey. From January 2020, the site will become part of a new large media project to promote Russia as a tourist destination for tourists from India and Vice versa.  The pages of the sites will provide useful information about the tourist regions and infrastructure of Russia and India, including in the format of a blog.

"We are engaged in PR of Russia (as a tourist destination) in India and vice versa since 2016: we organize advertising, press and bike tours, participate in exhibitions, organize road shows. Eugene's journey inspired us to create a web resource www.russinfo.in which later will become the main information resource about the tourist regions of Russia and India.  In India, everyone knows Moscow and St. Petersburg, and in Russia, many have heard about the beaches of Goa... But our countries are so big, and there are a huge number of regions that deserve the attention of Indian and Russian tourists! Some of them already told by Eugene during his trip (the cities of the Golden Ring, Nizhny Novgorod, Kazan, Saratov, Volgograd), and we will add information about Tatarstan, Murmansk, Ural, Baikal, Vladivostok, Kamchatka and Sakhalin to the web-site" - says Paresh Navani, Director of the Russian Information Center in Mumbai.

Evgeny Kutuzov’s route ran from Tver through the cities along the Volga, and now he heads from Saratov to Volgograd, Astrakhan.. Then Azerbaijan, Iran, from Iran to India by ship via Dubai. The return journey, will repeat the route of the great traveler Afanasy Nikitin, Evgeny will return by plane to  Crimea, and from there will walk to Smolensk, where the long arduous journey to India and the life of Afanasy Nikitin came to an end.

Now Evgeny made a forced stop in Volgograd. We wish you a speedy recovery and an easy journey. Follow Evgene's news on his official page vk.com

The first motor tour in memory of Afanasii Nikitin, organized by the Russian Information Center and Ivan Kovalenko (tour operator SNP-Crimea) took place in may 2017. Then the guys from the bike club Surat SuperBike Club drove through the Crimea and visited Feodosia, where near the monument to Athanasiy Nikitin they were met by the city administration and handed a bag of land to be brought to India.

The second motorcycle tour and the third one took place in June and August 2018, then Surat SuperBike Club drove from Moscow to St. Petersburg via Tver. At the monument to Athanasius Nikitin, the city administration arranged a whole performance for bikers. Were solemnly scattered the land, brought by guys from India, gathered at a monument to Athanasius in Revdanda (Maharashtra), where the traveller first set foot on Indian land. The third bike tour was attended by the Consul of India in St. Petersburg

The forth motorcycle tour named Athanasius Nikita was timed to the opening of the Crimean bridge, and was held in April 2019. Then the Indian bikers drove over the bridge with the flags of Russia and India, and after a traditional meeting with the administration of the city of Feodosia at the monument.