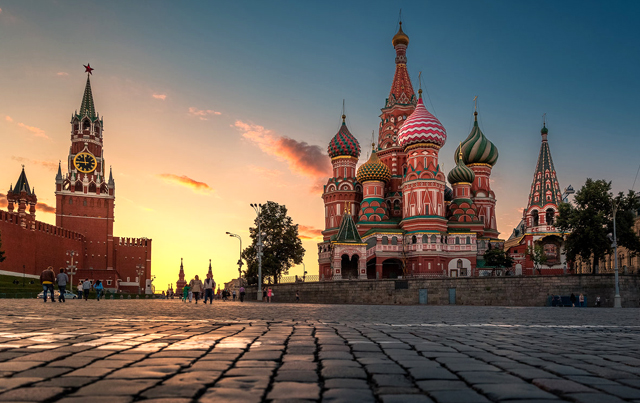 Red Square - the main and most famous square in Moscow and Russia, the arena of many important events of Russian history and the history of the Soviet state, the site of mass demonstrations and parades of the working people of the capital of the Armed Forces of Russia.

Even in ancient times there was an area in the eastern walls of the Kremlin, which roared a brisk trade. In the 16th century it was called by the name of St. Trinity church. Trinity, which stood on the site of St. Basil's Cathedral. In the Middle Ages are often blazing fire, so it was in the area and another name - "Fire". Since the mid-17th century it became known as "Red", that "beautiful" mean in the ancient language.

Modern Red Square - the solid stone, but this kind it acquired only in the 19th century, and before that was mostly wooden. Cobblestone square was completely paved in 1804.

After the Revolution, Red Square maintained its significance, becoming the main square of the new state. At the Kremlin wall Lenin's Mausoleum was built, the area has made the ideological center of Moscow. According to the plan of the socialist reconstruction of Moscow was demolished Kazan Cathedral, and even earlier destroyed the Iberian Chapel with the Resurrection Gates. So make room for festive parades and demonstrations. In November 1941 in the besieged capital in the Red Square hosted the famous parade of Soviet troops from where they went straight to the front. And in June 1945, there have been pillars of the Victory Parade, and 200 Nazi banners were thrown to the foot of the mausoleum. Currently, Red Square regained its historical appearance - the efforts of the Moscow authorities, national shrines have recently been restored.