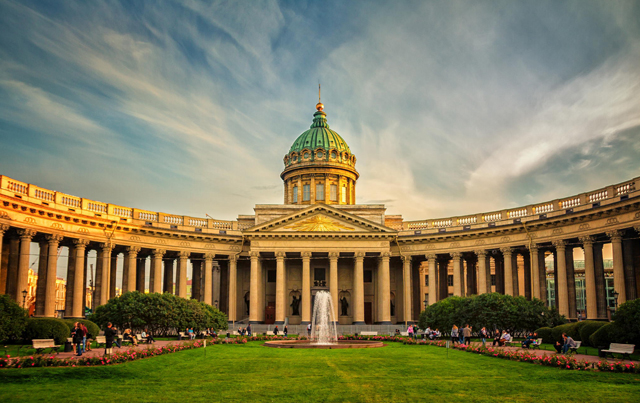 Traveling through Europe, imperator Pavel Petrovich, was struck by the beauty and harmony of the Cathedral of St. Peter's in Rome and the square in front of it, surrounded by colonnades. In 1799, when he was come back to Russian Capital, St-Petersburg, he announced a competition to design the cathedral, which would replace the dilapidated church of the Nativity of the Virgin (popularly known as Kazan), built earlier on the same place. The church houses one of the most important relics of Russia - the miraculous icon of Our Lady of Kazan. The main condition of the competition was that the future temple will be similar to St-Peter’s Cathedral in Rome. Of all the works presented he have approved the project of the young talented architect Andrei Voronikhin.

To construct the Temple was not an easy task. Construction of a new church on the site was supposed to Nevsky Prospect, stretched from west to east. In Orthodox churches the altar always faces the east, and the main facade with the entrance - to the west, so to Nevsky Prospect found himself facing north (side) facade of the future temple. Voronikhin found an elegant solution - side facade managed to visually transform into the main, to attach to it a grand semicircular colonnade opens in the direction of the main thoroughfares of the city. 96 set in four rows of steel columns also recall the columns, closing the square in front of St. Peter's Cathedral in Rome.

After the War of 1812, the temple was moved 27 captured flags of the defeated Napoleon army. And from this moment Russians kept the keys to the castles and cities of Europe and banners obtained by the Russian army as a result of campaigns of 1813-1814. Against the wall of the Kazan Cathedral buried the famous Field Marshal Mikhail Kutuzov. And on the front area of ​​the bronze monuments of great generals MI Kutuzov and MB Barclay de Tolly.