Cathedral on the Spilled Blood 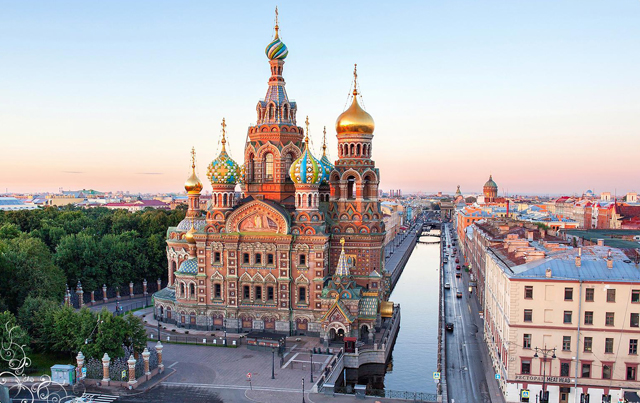 Cathedral on the Spilled  Blood (official name Church of the Resurrection) began to build in 1883 on the very spot where the bomb was blast in March 1, 1881. Ignatius Grinevitsky was mortally wounded Tsar Alexander II. The day after this tragic event was erected a wooden chapel, but from different provinces of the donations for the monument began to arrive in large numbers, and it was decided to build a temple. It was build within 24 years old, from 1883 to 1907. Since the building was erected on the banks of the Canal Griboyedov, architects abandoned the use of piles and a concrete base built over the entire area to prevent water has passed under the building.

Entrance to the temple originally was not open to all comers. It held only service dedicated to the memory of the deceased king.

With the advent of Soviet power and stopped the financial support by the state of the cathedral, and in 1938 he decided to disassemble and does build this place for something more useful. Soon, however, the war and the fate of the temple ceased to be a priority. During the siege the building was used as both the morgue and vegetable store. "Savior on potatoes" - so named it in the Soviet times.

When the war ended, the temple still decided not to demolish, but the original appearance he did not return, the building was used for many years for the storage of decorations Maly Opera Theater (today - St. Michael's). For visitors of the Resurrection Temple was opened relatively recently - in 1997 after a major renovation and 90 years after the consecration.

The temple was built as a memorial to the tragic event, but by looking at this right can not be said. Against the background of strong architecture of St. Petersburg, he seems to be a gingerbread house, like St. Basil's Cathedral in Moscow.

Among the elements of luxury decoration - fancy head of the cathedral, in the technique of enamel jewelry, magnificent mosaic panels with a total area of ​​7 thousand square meters. Gold letters of 20 granite boards on the facades of the church immortalized main events of the reign of Alexander II.

Under the shade of gray-purple jade in the temple grille with Catherine Canal is kept to this day and stones with the very same bridge, which killed the Emperor fell.

Inside the temple it is even more impressive than the outside. This is due to the fact that it was not designed for a mass visit, only for the elite. Here you can see the inlaid marble floors, rich collection of gems and colored tiles on which worked the best artists from all over the Russian Empire.

The most important place in the temple, not counting the altar, this is the point where the murder was committed. Above it was built tent canopy jasper topaz with a cross on top and underneath it is still stored the stones from the pavement, which fell dead emperor.