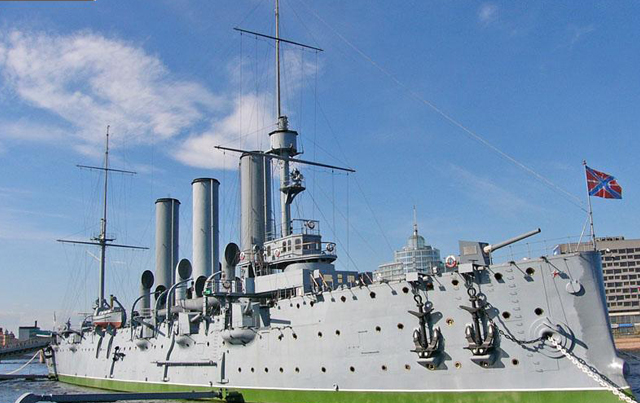 Cruiser "Aurora", probably the most famous symbol of St. Petersburg, and it is located in the historical part of the city on the Neva River. The cruiser 1st rank of the Baltic Fleet "Aurora" is named after a sailing frigate "Aurora", famous for the defense of Petropavlovsk-Kamchatsky during the Crimean War. Single shot with "Aurora" was the signal for the beginning of the storming of the Winter Palace; cruiser was one of the main symbols of the Russian Revolution.

Museum on the basis of the cruiser was created in Soviet time, around 1950, and now it is a large and well-known town museum. You need to know that visitors are only open upper deck and forecastle with a 152-mm gun, and of the other rooms of the museum ship. Despite the fact that there is a museum, the cruiser is operating the ship, which mechanisms are supported by the work of officers, warrant officers and sailors. If you want to take part in thematic tours that include a visit to the underwater hull and the engine room, it will have to pay the entrance fee.

Since September 2014 he has been in Kronstadt for repairs, after which the 16 July 2016 returned back to the eternal parking in Petrograd embankment.