About Russian Information Center in India 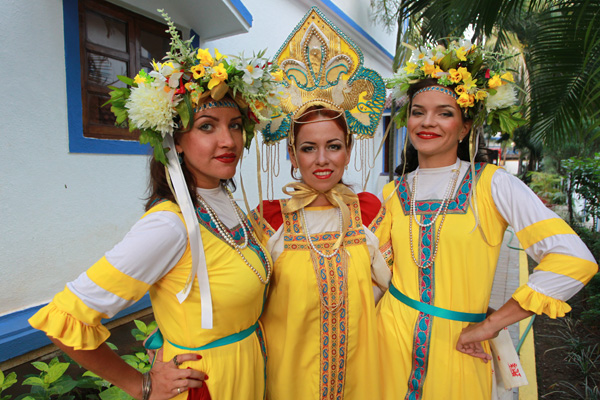 We are thankful to you and pleased by your attention and for your interest in exploring what Russia has to offer for the corporate or individual traveler.

RIC provides high quality, secure and value for money tourism services to travel agents, corporate and individual travellers who are keen on exploring the vast cultural, architectural, adventure and natural sights in the regions of Russia.

-          Events to promote Russia as a tourist destination

The mission of the Russian Information Center in India (RIC) is to promote Russia as a tourism brand in India and strengthen Russian-Indian relations through tourism.

Objectives of the Russian Information Centre in India (RIC):

- Popularization of Russian culture in India

- Organization of events for cultural exchange between countries

Stages of development and significant events of RIC

The Grand opening of the Russian Information Center took place on December 13, 2013 in Goa, India, in the presence of Consul-adviser of the Consulate General of Russia in Mumbai Alexey Mzareulov and honorary Consul of the Russian Federation in Goa Victor Albuquerque.

The project's objectives were to inform Russian-speaking tourists about Goa, its infrastructure, attractions and culture, and to promote Russian culture and Russia as a tourist destination for Indian tourists.

"Today is a very significant event for Russians living and vacationing in Goa. We have founded a very important information point - the Russian information center and the monthly Russian-language digest "Colors of Goa", published by it, " - said during the ceremony am Mzareulov. The first issue of the magazine published a greeting of the Russian Ambassador to India A. M. Kadakin. (1)

“It is not always easy to get information about attractive tourist destinations in Russia, available packages, flights and hotels, and especially about the availability of Indian food in Russia. We will provide the necessary information about Russia to those Indians who are interested in our country, and thus promote a variety of opportunities and culture of Russia” " said Ekaterina Belyakova, head of the RIC.

In 2016, RIC moved to Mumbai (Maharashtra, India). On February 29, 2016, the program "Program for the development of mutual tourist flow between Russia, the countries of the Eurasian Economic Union and India" was launched at the Center of Science and Culture of the Russian Federation in Mumbai, followed by an event in new Delhi on March 21, 2016. (2) (3)

Speakers of the conference were: Vladimir Dementyev, head of the Center of Science and Culture of the Russian Federation, Satish Soni, managing Director of MTDC (Maharashtra tourism), Ekaterina Belyakova and Paresh Navani - Director of the Russian Information Center (RIC) in India. Speeches from the head of the Department of tourism of St. Petersburg and the Department of tourism of Crimea were read to the audience.

The speakers noted that there are about 15 million Indian tourists a year. Many of them go to Europe and Asia, and the regions of Russia are less known. According to the Federal tourism Agency in 2015, the number of tourists from India to Russia is only 31 thousand people. Based on these statistics, we can conclude about the great prospects of the program. (4)

As part of the program, information and FAM tours for Indian travel companies and media were organized to St. Petersburg, Moscow, Crimea, Tatarstan, Tver, Ekaterinburg, Vladivostok and other regions of Russia. Among them is a promotional tour on the first Charter flight of Ural Airlines with 120 travel agents and 20 bikers on board. (5)  From the launch of the program in 2016 to the end of 2019, RIC conducted 15 FAM tours to Russia with the participation of more than 600 travel agents. (17)

On September 30, 2017, RIC with the support Of the national tourism marketing center "Visit Russia", St. Petersburg State University of Economics, the Russian Union of tourism Industry (PCT) launched the program "India-Friendly"in St. Petersburg. The objective of the program is to adapt tourist facilities in Russia for the reception of Indian tourists in matters of food and services.  Currently, the program is actively implemented in 6 regions of Russia, namely in Moscow, St. Petersburg, Kazan, Crimea, Yekaterinburg, Vladivostok and Almaty (Kazakhstan). RIC plans to expand the geography of the program's presence in Russia and use it to make other regions interesting for tourists from India. (6) (7)

From 2017 to 2019, RIC organized four Moto rides named after Athanasius Nikitin. The First took place in May 2017, when bikers from the Surat SuperBike Club drove through the Crimea and visited Feodosia, where they were met by the city administration near the monument to Athanasiy Nikitin and handed a bag of land to be brought to India.

The Second and Third motorcycle tours took place in June and August 2018, Indian bikers drove from Moscow to St. Petersburg via Tver. At the monument to Athanasy Nikitin, the city administration arranged a performance for bikers. The earth brought by bikers from India, collected at a monument of Athanasy in Revdanda (Maharashtra) where the traveler for the first time set foot on the Indian soil was solemnly scattered. The third bike tour was attended by the Consul of India in St. Petersburg.

The Fourth motor tour named after Afanasy Nikitn was timed to the opening of the Crimean bridge, and took place in April 2019. Then the Indian bikers drove across the bridge with the flags of Russia and India, and after the traditional meeting with the administration of the city of Feodosia at the monument. (9) (10) (11) (12)

At the moment, RIC is the official representative Of the Department of tourism of Sevastopol (Crimea) and the Department of tourism of Vladivostok, Primorsky Krai (far East of Russia) to promote their these regions in India. An agreement on cooperation with the Ministry of economic development of Crimea and the film Commission of the Republic of Crimea was also signed (13) (14) (15) (16)

Events in which RIC took part

RIC is a regular participant of tourist exhibitions in India: Satte, OTM, TTF and others. RIC also took part in such events as the Russian-Indian Business Summit in Delhi, the Open Crimea Forum, where RIC met with the head of the Republic of Crimea Sergey Aksenov (17) (18) (19) (20)

RIC has been cooperating with Goa Tourism for a long time, a series of road shows and conferences has been organized in Kazakhstan, the Baltic States, Moscow. One of the conferences was held with the participation of the Head Of the Department of international cooperation of Rostourism Valery Korovkin and was devoted to the simplification of the visa regime between India and Russia (21) (22) (23)

- 25 employees in Russia and India