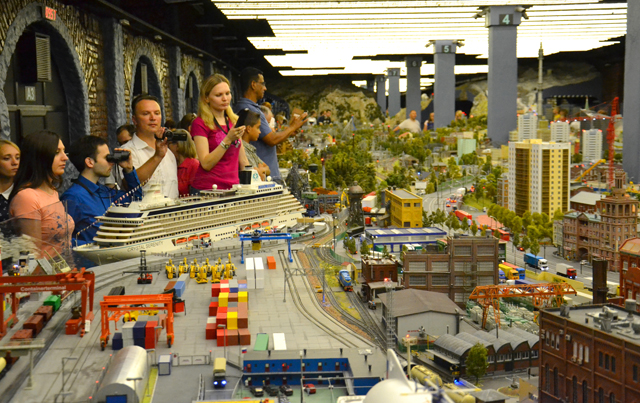 Grand Maket Rossiya ."  which means grand model of Russia, is an amazing museum, the exhibition of which  actually has  just one exhibit . But this exhibit is truly unique. You will see a colossal working layout of the country, that artistically presents the  generalised  image of Russia. The size of this “man-made miracle” is  800 square meters, which is currently the second largest in the world. During five years of its construction dozens of professionals worked on its creation  day-and-night.  The images of various cities and regions  are presented on the layout, the genre scenes  reflect almost all kinds of  human activity that we see around us.

The rail and road traffic adds  dynamics to the exposition, and the various scenes with moving objects and figures which are controlled  by the visitors. More than 200 trains pass through the smart  routes,  that  are stretching for almost two and a half thousand meters, and  turn the layout into a solid living organism .

The  car traffic that uses electromagnetic induction as the power supply for cars and that is for the first time ever sight that amazes everyone. Dozens of various cars will astonish you by  the complexity and singularity of their movement one the roads, while the headlights, brake lights and turn signals bring in the brightness to the exposition and  illuminate the roads  at night.

Airports, railroads, shipping, factories, every aspect of the human life and need is considered in amazing detail and realism. Right down to the cycle of day and night, every fifteen minutes from East to West over the layout  the Night changes to day and back, using  almost 8,00,000  L.E.D’s. The flood of light and night creates a truly unforgettable experience!