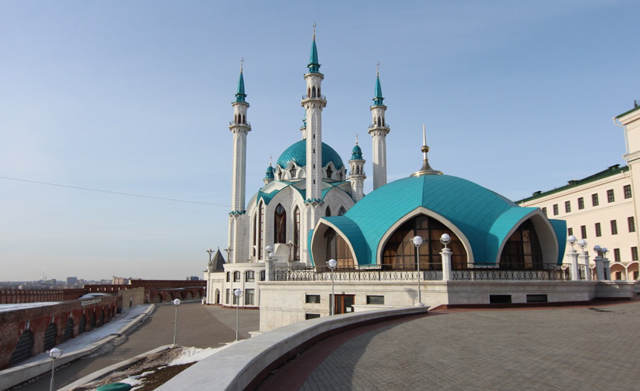 The stunning white walls of the Kazan Kremlin is the primary attraction point in Kazan. The Kremlin dates back to the 12th century and hosts a wealth of sights within its walls. The most obvious one is the blue and white gem of the Kul Sharif Mosque, one Russia’s largest. Next to it is the Russian Orthodox Blagoveschensky (Annunciation) Cathedral and the mysterious leaning Tower of Syuyumbike, the legendary last queen of Kazan.

The Kremlin is home to governmental bodies, a dedicated museum, as well as shops and cafes. One can easily spend a day here, especially during art shows and festivals. Sunsets over Kazan, as viewed from the Kremlin, are incredibly dramatic with deep colours and clouds appearing within reach, and the air filled with a sweet smell like toffee.

Kazan Kremlin was designated a UNESCO World Heritage site in 2000.