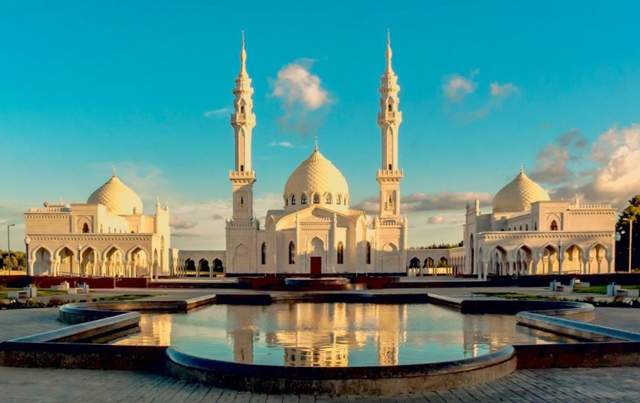 A thousand years ago on a tall shore high above Volga, 180 kilometres away from Kazan, there sat the buzzing capital of the thriving and formidable Volga Bolgar Civilization. Here the ancestors of Tatars adopted Islam in 922, and in the 13th century Bolgar became the capital of the Golden Horde.

A UNESCO World Heritage site, Bolgar remains a sacred pilgrimage place. A visitor can admire the Cathedral Mosque, with its Big Minaret, North and East Mausoleums, Khan's Tomb, built in the 13-14th centuries.

So important is Bolgar for modern Tatarstan that it continues to be developed, keeping it alive and present in the Tatarstan culture. In recent years an elegant White Mosque was added and a Commemoration Monument to celebrate the adoption of Islam. It hosts the world’s largest Quran with pages 2-metres tall and a solid malachite cover weighing 800 kilograms.

The excellent on-site museum displays intricate pieces of beautiful medieval jewelry, runic scrolls and weapons, and tells the engaging story of what was once the core state between Europe and Asia.

After a day full of sightseeing a visit to the Bread Museum with a working mill will be rewarding.