The New Athos Monastery in Abkhazia 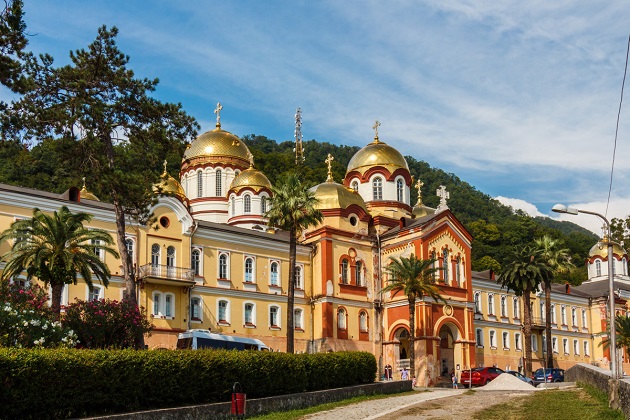 Abkhazian’s are deeply religious people and country. Here at the beginning of their era came to preach one of the 12 Apostles of Jesus, Simon the zealot. Situated here is his cave where he lived and prayed, which contain his Holy relics. Later on, in this territory a temple was erected in his honour.

Among the picturesque mountain scenery of Abkhazia, in the Sun sparkles the many Golden domes of the New Athos Monastery of the Holy Apostle Simon. The history of this Holy Monastery goes into the distant past.

Its architecture is astounding and fits very well into the green landscape in front of the seaside beaches and view. The Interior murals invigorate and exude divine energy. Without a doubt, here and to this day the Holy Spirit dwells.

Among the visitors were in himself the Emperor Alexander III and his family, he gifted the chimes, which later were used to decorate one of the bell towers of the new Athos monastery.

During the 1900’s, the monastery experienced a period of vibrant popularity and was considered the largest Orthodox monastery and the spiritual stronghold of the Russian Caucasus.

A must see point in Abkhazia – for its history, spirituality, sheer beauty of its Gold topped temples shining in the Sun and vibrant, attractive, gold-leafed murals decorating the interiors.