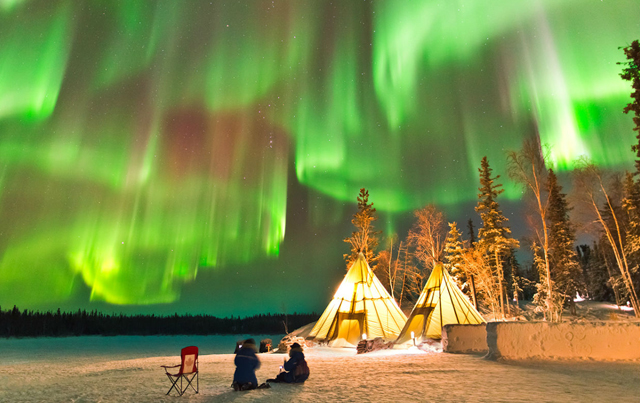 Aurora (or Northern) Lights - amazing in its beauty phenomenon of nature! Its photos almost always cause controversy about the use of photoshop - so incredibly look iridescent colors in the night sky. In fact, the Northern lights have long been studied: it's just the glow of the upper rarefied layers of the atmosphere caused by the collision of charged particles with atoms. But is this phenomenon becomes less exciting? No: both children and adults still perceive it as real magic.

The Legends of Northern Lights:

In Japanese culture, the belief is that a child which is conceived under Aurora Lights is a blessed child with intellect, good luck and looks. There is a fascination for Aurora lights and it matches with the increase in visitor numbers from Japan, Singapore, China and Malaysia.

The Algonquin’s take on the Aurora was that it was created by light from a fire built by Nanahbozho, their creator. They understood the fire to be Nanahbozho’s way of telling his people that he remembered them and was watching over them.

Aboriginal Australians were more used to seeing the Aurora Australis (The Southern Lights) and watched in awe as their gods danced overhead.

Particles discharged from the sun travel outwards and towards Earth before they are drawn irresistibly toward the magnetic north and south poles. Particles passing through the Earth's magnetic shield, mingle with the atoms and molecules of nitrogen, oxygen, and other particles which result in the dazzling display of lights in the sky. They occur at an altitude of 50-1000Kms above our planet.

What causes the colours in the northern lights?

The type of collision also makes a difference to the colors that appear in the sky: atomic nitrogen causes blue displays, while molecular nitrogen results in purple. The colors are also affected by altitude. The green lights typically in areas appear up to 150 miles  high, red above 150 miles; blue usually appears at up to 60 miles and purple and violet above 60 miles.

Which is the best time of the year to see the Aurora Lights?

January to March is probable the best three months to go Aurora hunting as the days are short and the nights are dark, long and cold making it easier to spot the Aurora Lights. In summer, the sun almost does not set in the Artic circle making it near to impossible to sigh the Northern lights.

Which are the best location from which to see the Northern Lights in Europe?

The Eastern and Central European regions where you can see Aurora Lights even with very low magnetic activity & the KP index is 0 (zero)  are:

Video of the Aurora lights in Murmansk: https://www.youtube.com/watch?v=KQOUs2mrIpg