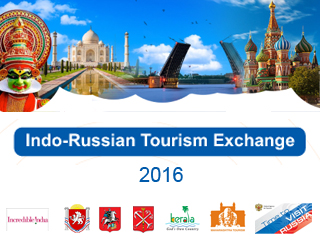 In order to implement that a series of actions and events are planned to take place in India and Russia:

-Organization of FAM tours to Russia for Indian tour operators and press  within 2016-17.

-Organization of round tables with representatives of regional Ministries of Tourism of India, Russia and Eurasian Economic Union countries, tour operators and press of the said countries.

-Organization of series of conferences for Indian tourism business representatives. The said is planned to take place in all major Indian cities (Delhi, Mumbai, Kolkata, Chenai)  and Russia (St-Petersburg, Moscow) in 2016.

-Participating in all tourism professional exhibitions all over India to promote Russia as a tourist destination.

The above Programme is designed for active advancement of aims and goals of Eurasian Economic Union, to involve in EAEU’s mechanism such a powerful humanity and economic resource as mutual tourist traffic.

The key word in Program is "Mutual", which is a very logical, as any street always has two-way traffic.

Since the beginning of our program, we have found a great response and support among departments of tourism of both countries, which means this topic it is very much in demand, and important.

Here is few quote from the official letters of heads of departments of Tourism of St. Petersburg and the Crimea addressed to the Indian travel community.

Mrs. Inna Shalyto (St-Petersburg): "I am sure that participation in the framework program for "Indo-Russian Tourism exchange" will give a chance to find new opportunities to strengthen relations in the field of tourism for our country "

Mr. Strelbitsy (Crimea): «Each tourist - our small investor and the Crimea is interested to increase it number as much as possible. Therefore, we strive to give people an affordable and quality holiday for each taste and wealth. We always welcome new partners and are confident that today's event will help to further mutually beneficial cooperation".

Speaking about tourism, this important industry, which not only creates a positive impact for both economies, but also plays an important humanitarian role of cultural exchange, the establishment of social and business ties between Russia and India. The tourism potential of Russia and India, their numerous regions is huge, and in my opinion not is not fully explored.

You have heard of St. Petersburg, Moscow – normally these regions will carry their own brand value – However there are many ‘not-so-known’ but equally attractive regions and products, which your customer will like not less. Places like: the mountains of the Caucasus, the castles of Crimea Volcanoes in Kamchatka,  Lake Baikal - the world's largest fresh water lake (estimated to hold 20% of the entires worlds fresh water, Wooden churches of Kizhi - completely built without using a single nail, Adventure / winter sports in Sochi and Altai

Now if you look at Russian tourist coming to India – everyone knows the Golden Triangle, Goa, Mumbai however locations like Gods Own Country Kerala, Karnataka, Rajasthan and Himalaya the eastern side of India are mostly unexplored and not adequately promoted by the industry and media.

Russia is one of the most traveling nations in the world, and about 10 million people travels abroad yearly. Now look at the incoming tourism from India. About 15-20 million Indian tourists travel abroad each year, and promised that by 2020 this figure will rise to 50 million. Among them, only 30 000 people going to Russia yearly. It is nice, that the figure for the last couple of years has doubled, but there is still opportunities for growth. For example, look on China, where a similar program for tourism exchange has been work for several years. About 500 thousand tourists from Russia in China in 2014, and in 2015 this figure increased to 800 thousand.

I hope that together we can do so that these statistics will change in the near future, and within a year or two the number of tourists from Russia to India, and from India to Russia, will be at least equal.

Outbound tourism from Russia and opportunities for India.

As you can see, India has great potential for growth, despite the downturn in the past year. Not long ago, Egypt was banned in Russia as well as Turkey, which were the main destinations for Russian. So India has a good chance to take over part of the flow.

There is another fact that Russia as a tourist brand required to be promote in India. Not only ordinary tourists know little about Russia, but a similar pattern is observed among agents. Our FAM tours will help to identify the correct position and strategy, how and to whom to sell Russian tourist packages.

Because of all of these reasons, mentioned above, the program of Indo-Russian Tourism Exchange starts, and its main objectives is to increase mutual tourist flow by:

Information exchange between Russia and India,

To promote the tourist potential of their regions,

The establishment of business contacts,