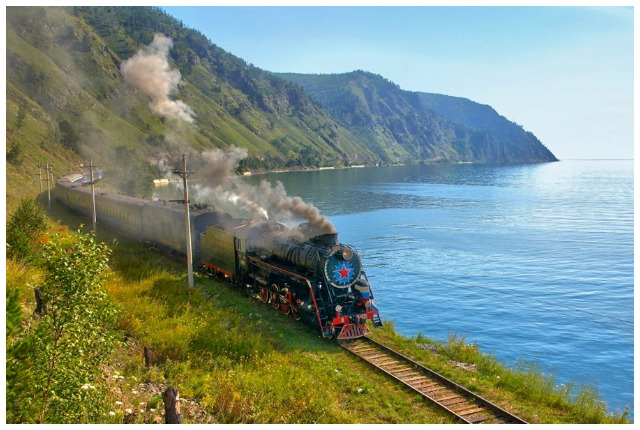 The Circum-Baikal railway is a unique architectural monument and one of the most popular excursions around Baikal. It combines the beauty of the Baikal mountains, the lake itself, unique architectural structures-many tunnels, bridges, retaining walls, water tower, old lighthouse, centenary railway station, ancient Russian villages, many other unique objects, and of course the great history! No one can resist the beauty and grandeur - a combination of Circum-Baikal railway and lake Baikal!

The name "Circum-Baikal railway" refers to the entire line skirting the southern tip of lake Baikal. From the source of the Angara river to Slyudyanka, which is derived from transit traffic. The Eastern part remains the main part of the Trans-Siberian railway.

Before the revolution, this short section of road was called the "Golden buckle of Russia's steel belt", the buckle because it connected the Trans-Siberian railway that was torn apart by Baikal, and the Golden one because it surpassed all existing roads in Russia in terms of cost of work. The first train passed through the railway on September 30, 1904.

In the program "Circum-Baikal railway" included ride by boat through the source of the Angara river to the place of boarding the train.

The train leaves at 10:00 and all day you enjoy the beauty of lake Baikal. The speed of movement is not more than 20 km/hr, which will give you the opportunity to make a huge number of beautiful photos! The program includes 3-4 stops (40-60 minutes) that you can walk along the shore of the Baikal lake. Home-made lunch (the food was lovingly prepared by a Russian village grandmother from the products that she grew herself. In the evening, at 20: 00, you arrive at the Irkutsk railway station and take the bus back to the hotel in Irkutsk. Check in to the hotel, dinner, rest.