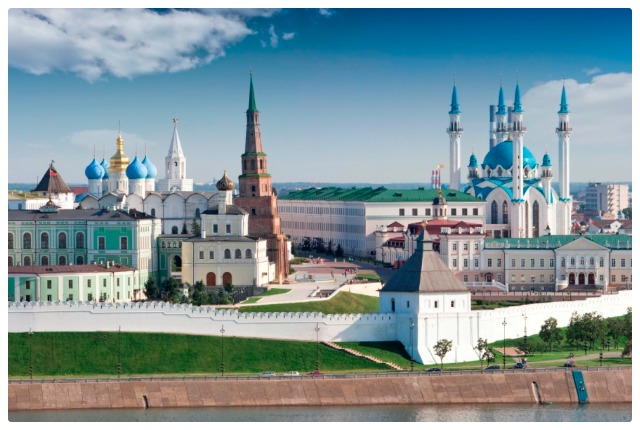 Kazan celebrated its 1000 anniversary in 2005 and keeps on growing wealthier and more beautiful. Known as “The Third Capital of Russia”, Kazan is a modern and comfortable city offering a wide array of choices to a visitor – from countless cafes and restaurants, shopping and entertainment malls to world class sports and cultural events. Kazan Kremlin was designated a UNESCO World Heritage site in 2000

A highly developed and attractive region of Russia. Tatarstan lies in the center of country, 800 km east of Moscow, on the greatest European river, the Volga. Tatarstan is a land of wealth, peace and harmony. Here you will find an authentic way of life, with its own cuisine, music, fashion, art, architecture, hard-working and joyous people. Tatarstan defies the notions of East or West. It has its own character that is modern, colorful, rich, energetic and diverse. Kazan: The capital of Tatarstan is the city of Kazan. Kazan celebrated its 1000 anniversary in 2005 and keeps on growing wealthier and more beautiful. During City tour you will see: Volga river views, Central streets and square, pedestrian streets Baumana, Peterburgskaya, Temple of all religions, Tatar quarter etc

The stunning white walls of the Kazan Kremlin is the primary attraction point in Kazan. The Kremlin dates back to the 12th century and hosts a wealth of sights within its walls. The most obvious one is the blue and white gem of the Kul Sharif Mosque, one Russia’s largest. Next to it is the Russian Orthodox Blagoveschensky (Annunciation) Cathedral and the mysterious leaning Tower of Syuyumbike, the legendary last queen of Kazan. The Kremlin is home to governmental bodies, a dedicated museum, as well as shops and cafes. One can easily spend a day here, especially during art shows and festivals. Sunsets over Kazan, as viewed from the Kremlin, are incredibly dramatic with deep colours and clouds appearing within reach, and the air filled with a sweet smell like toffee. Kazan Kremlin was designated a UNESCO World Heritage site in 2000.

Temple of All religions (read more …)

The temple is a symbol of the peaceful co-existence of people of different religions and ethnicities in Tatarstan.  It is a unique complex combining Orthodox and Catholic churches, a Muslim mosque, a Jewish synagogue, a Buddhist temple, a Chinese pagoda – many iconic elements of 16 world religions, including the images of lost civilizations.

PM: Transfer to the railway station

08:00 Arrival to Moscow, transfer to hotel

Check-in to hotel and continue the main program with Moscow and St. Petersburg (more details ...)

All sightseeing with English speaking guide according to the program

Entry fees for all monuments according to the program