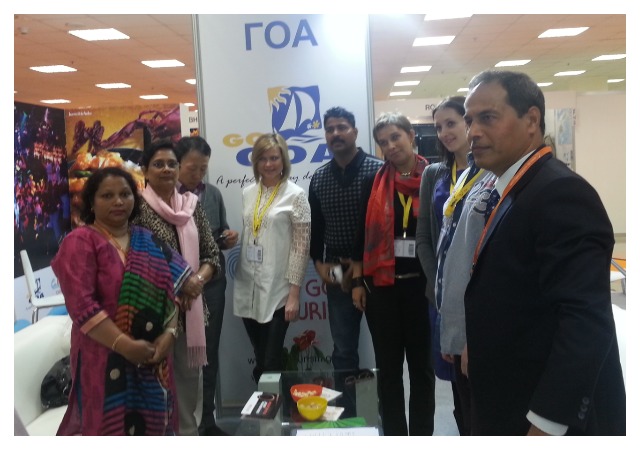 Goa may become the most in demand destination in South-East Asia for Russian tourists, Goa Tourism and Russian information center in Goa announced during joint press conference at MITT/ Travel and Tourism  2014 exhibition in Moscow.

Russian Information Center in Goa with the support of Consulate general of Russian Federation in Mumbai along with Goa Tourism presented Goa at MITT/ Travel and tourism - 2014 exhibition in Moscow. Speaking at press conference in Moscow Goa Tourism and Russian information center officials declared that Goa has all the potential to become one of the most prominent destinations for Russian tourists.

The steady growth of tourist inflow from Russia is the result of aggressive marketing campaigns carried by Goa Tourism as well as the outcome of numerous efforts of the state government to create a world-class infrastructure in Goa. It includes new terminal at Dabolim Airport, and many various projects aimed at developing road and transport infrastructure, establishing new leisure platforms and concepts, building modern hotels and resorts. State’s new beach cleaning program which is being implemented within past six months will soon put Goa beaches in the list of the cleanest beaches in Southeast Asia.

Goa Tourism is also offering variety of new concepts like eco-tourism, heritage and culture tourism in order to spread out our emphasis from beach tourism and to ensure flow of tourists to unexplored areas of the state.

Goa Tourism is also looking forward to introduce new projects like sea planes, hot air balloons, family theme parks, golf course, marinas etc. as soon as possible. Ensuring tourist safety is one of the most important agenda. State authorities have deployed efficient lifeguard system and sufficient a Police forces who will be stationed at the beaches till midnight. Besides this, CCTV cameras had been installed at high footfall areas.

Despite the incidents with local taxi operators strikes in January and February 2013 , which resulted in some of the excursions were canceled , and tourists for a few days had problems with using the taxi service , the incident was over by the timely action of the authorities.

“Last few days have witnessed certain unfortunate incidents involving some representatives of the Taxi Trade and Russian tourists.    I wish to reiterate that Govt. of Goa is keen on ensuring safety of all tourists visiting the State and make them feel special and welcomed. The Govt. has constituted a machinery to resolve all issues pertaining to Taxi Trade, and we are optimistic of coming to a solution. We are also aware, that the minor incidents have been unfortunately blown out of proportion by some sections of the media both in India and Russia and we wish to assure you that, Goa Govt. is totally in control of this situation and we will do whatever we can to preserve the peaceful and tourist friendly atmosphere in the State. We are optimistic that the love and affection shown by Russian tourists for Goa will continue and people from these two great nations will exchange cultural thoughts through the medium of tourism. Goa will always welcome tourists from Russia with great affection in the years to come,” - Dilip Parulekar, Tourism Minister, Government of Goa said in his address to the MITT / Travel and Tourism 2014 conference participants.

Decision of the Government of India to include Russia in the list of countries entitled for tourist “Visa on Arrival” facility has been announced earlier in 2014. The new facility would allow tourists to apply online and they would then be informed within a few days about their visas on arrival at any of the international airports in India. This decision, according to travel industry professionals both in Russia and India will contribute to the growth of tourist inflow from Russia in Goa.

"The new simplified visa regime will be an important factor in the growth of Goa’s potential as one of the key destination for Russian tourists in Southeast Asia. Moreover, state authorities are keen on developing Goa tourism infrastructure which also has positive effect on the growth of the tourist flow as well as increases the percentage of tourists returning to Goa next year , "- Ekaterina Belyakova, head of Russian Information Center in Goa said.

Russian Information Center (RIC) was established in December 2014 with the support of the Consulate General of Russia in Mumbai. RIC aims at assisting Russian-speaking tourists in Goa, increasing Goa attractiveness as a primary tourist destination in the Russian market, and promoting Russian culture in Goa.

"RIC is constantly increasing resources to assist our compatriots in Goa. Our call-center with experienced, knowledgeable and, most importantly, Russian-speaking operators is available for Russian tourists round the clock. People call us with various questions ranging from where to buy medicines and how to get to the hospital to registration of marriages and getting child birth certificates,"- Ekaterina Belyakova says.

Earlier in 2014 RIC issued a memo for Russian tourists, which was disseminated among travel agencies and tour operators’ offices in Russia and India. RIC drew the attention of tourists to the norms and rules of conduct in Goa, including the choice of outwear. RIC also urged tourists to be vigilant and comply with local laws, customs and traditions.