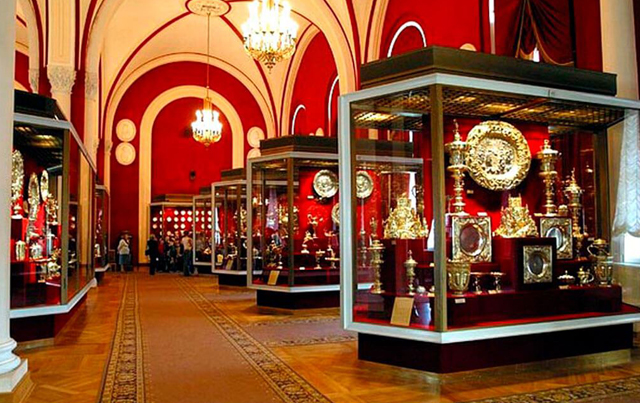 Armory - a treasure-house, one of the most famous Russian museums, amazing visitors with the wealth and splendor of the collection. And no wonder, because the basis of the museum's collection was for centuries the royal treasury of jewels, made in the workshops of the Kremlin, as well as gifts to the Russian Tsar from foreign ambassadors. The building of the Armory was built in 1851 and was the project of architect Ton. The building was originally designed for the storage and display of the royal treasures and is one of Russia's first museum buildings of special purpose.

Excursion to the Armory surprises tourists with treasures of the nation, the precious gifts, cups, icons, the best products of Russian and foreign craftsmen. On the tour the Armory, you get acquainted with the masterpieces of armorers, collectible guns, swords of Damascus steel, studded with diamonds and rubies, swords attract the attention of both adults and children. You will learn about the history of the royal court, the value of Russia in the world, the importance and the complexity of the diplomatic relations.

- Unique works by Russian masters from the 12 - early 20 th century, including most of the famous Faberge eggs;

- Monument weapons of skill from 12 - 19 centuries and Russian military decorations;

With a collection of 4,000 exhibits, Armoury is considered as one of the most famous museums in the world, annually attracting millions of visitors from around the world