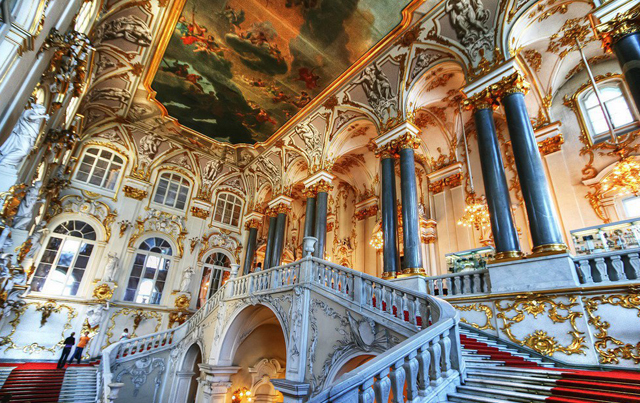 It is one of the largest art museums in the world, with its exhibits placed in more than 350 rooms. A special place is occupied by the state rooms of the Palace. In 2015 St. Petersburg Hermitage entered the top ten most visited museums in the world as rated by the British publication The Art Newspaper.

The State Hermitage Museum - one of the greatest assets of the Russian Federation is not only the most important museum in St. Petersburg, but also one of the largest art museums in the world. Hermitage consists of six historic buildings located along the banks of the Neva river. The heart of the Hermitage is the Winter Palace (the former residence of the kings).

A sightseeing tour of the Hermitage will allow you to get acquainted with the front rooms of the Winter Palace, the main residence of the Russian imperial family. The tour starts at the Hermitage with the famous Jordan Staircase and first passes through the halls of the Neva enfilade, which was host to all the official ceremonies and celebrations. Tourists will see the Antechamber, Nicholas and Concert Halls, the Malachite Room and the Small dining room. The interiors of the rooms have been reconstructed after a fire in 1837 in accordance with the mode of the mid XIX century. Of particular interest is the gallery of portraits of the Romanov family and the War Gallery of 1812. During a tour of the Hermitage, the participants will see a collection of Western European paintings, which has no equal. In the halls of the Hermitage are present works of all periods in histiry-from ancient Egypt and ending with the Western European and Oriental part of the XX century

Of particular interest to tourists is the Knights' Hall, which presents the figures of knights in authentic garb. Of course, the tour of the Hermitage gives only an initial idea of this largest museum in Russia and Europe, because as they say, if one sees all the exhibits in the Hermitage and stops at each exhibit only one minute, it will take as much as 11 years to complete.

The finest museum in Russia and one of the best in the world!