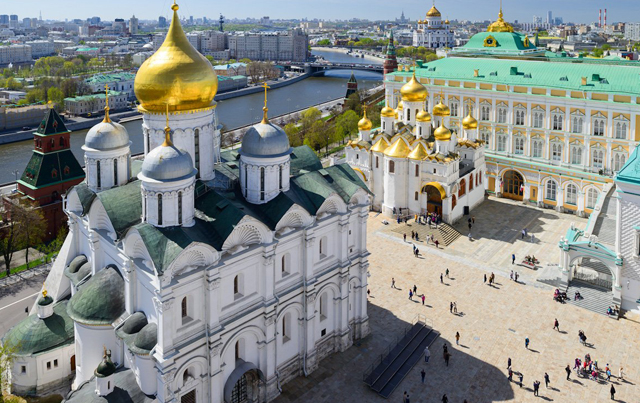 During the tour in the Moscow Kremlin, you will visit the inner territory of the Kremlin, Assumption Cathedral and the Cathedral of the Archangel.

Going into the Kremlin through Trinity Kutafiya tower and gate, you will see the Arsenal building, built in the time of Peter I, with captured guns of Napoleon's army. Next, you'll continue on to the Ivanovo area, the proverbial, Senate Palace, the famous Tsar Cannon, the largest weapon of its time and the Tsar Bell, which weighs about 200 tons. You will come to the famous Cathedral Square, perhaps the most beautiful square in Moscow and one of the oldest. The area is surrounded by the Belfry of Ivan the Great, Patriarch's Palace, the Church of Deposition of the Robe (home church of Moscow metropolitans), the famous Palace of Facets, Annunciation and Archangel cathedrals.

Assumption Cathedral was built in 1479 by Italian architect Aristotle Fioravanti. For centuries the Assumption Cathedral of the Moscow Kremlin was the main temple of the Russian state. Here were conducted the ceremonies of coronation, the coronation of the emperors, heads of the Russian Orthodox Church, the burial metropolitans and patriarchs. Murals of the cathedral, numerous icons and various utensils are artistic works of world importance. Today, the cathedral has an unique collection of ancient icons, which you can read while visiting.

Archangel Cathedral of the Moscow Kremlin was built by Ivan Kalita in 1333. In 1508, at the site of the ancient temple a Venetian architect Aleviz New erected a new majestic cathedral. Archangel Cathedral of the Moscow Kremlin was the ancestral burial place of great Moscow princes and kings. Here lie the great princes Ivan Kalita, Dmitry Donskoy, Ivan III of, Ivan the Terrible, Tsarevich Dmitry, Tsars Mikhail and Alexey Romanov. Just a dynastic necropolis of 47 tombs and 2 cancers. In the painting of the cathedral's are present the portraits of the dead.