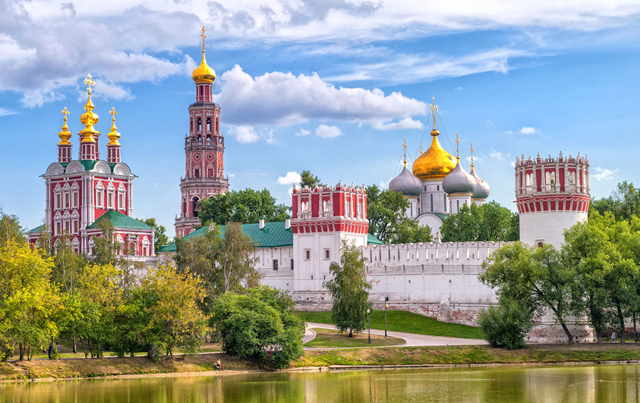 Novodevichy Convent is one of the most beautiful monasteries in Moscow. Located on a peninsula that is surrounded on three sides by the Moscow River. The monastery is quite extensive and includes commercial and residential buildings, churches, bell towers.

Novodevichy Convent was built in 1524, during the reign of Basil 3rd.

The Grand Duke made a promise to build it if the ary could recapture Smolensk from Lithuanian invaders. Place for the Novodevichy convent chose not easy - the icon of the Holy Mother of Smolensk (from Greek means "Putevoditelnitsa") sent back from that field in Smolensk.

The name of the monastery is also shrouded in legends. According to one legend, during the Mongol-Tatar wars tributes to them was not always via money but sometimes they were carrying away the most beautiful of Russian girls. The girls were collected on the field before being taken away post which, the field came to be known as the Maiden, after these incidents a monastery was built there. The second legend says that the first Abbess of the Novodevichy Convent was the nun Helen, who bore the Devochkin name which then resulted in the current name in use. There is another opinion that the monastery was called Novodevichy unlike Ascension Monastery, which was before the revolution, in the territory of the Kremlin and was nicknamed "Starodevichim".

In those days in the Novodevichy Convent received noble and rich women: the king's wife, knights, their sisters, widows and daughters. They made very good contributions: gold, jewelry, silver, pearls, and there were also royal demesne lands award.

During the reign of Peter the 1st - he built a shelter for illegitimate children in the Novodevichy convent. The Children were properly raised and trained in the art of lace making. The  Shelter in those times resembled a modern orphanage.

In 1812, the Novodevichy Convent was almost blown up by gundpowder. French soldiers of Napoleon's army left open barrels of gunpowder primed with burning wicks to blow up, in the basement of the cathedral of Smolensk. Miraculously some Nuns noticed the explosives and thereby savedthe abode. But the story does not end there, Napoleon did not want to leave Moscow without destroying its main domain, and the Novodevichy convent in particular, and said he would not leave until he personally was not convinced of the destruction. He stood on the opposite bank of the Moskva River on the Sparrow Hills expecting and waiting for the fiery explosion and fire. To save the convent a Moscow house owner who was staying near the Novodevichy Monastery, set fire to his house. The explosion and fire was so big that Napolean did not have any doubts about the death of the Novodevichy Convent and his army retreated.

The Novodevichy Convent has a special attraction - the Novodevichy Cemetery. It is divided in turn into "old" (located on the territory of the monastery) and "new" (in 1898-1904). Built south of the monastery). On the "old" were buried the relatives and children of the royal family, well-known cultural figures, heroes of 1812: Denis Davydov, Pisemsky, Volkonsky, Odoevsky and others.

The "new" Novodevichy Cemetery has the second highest honor for burial in the Soviet Union after the Kremlin wall. On its territory are buried: Anton Chekhov (at his grave in the spring blossoms beautiful cherry orchard), Nikolai Gogol, ST Aksakov, II Levitan, Nadezhda Alliluyeva - Stalin's wife, Lyubov Orlova, A. Tolstoy, Khrushchev, and many other famous personalities.