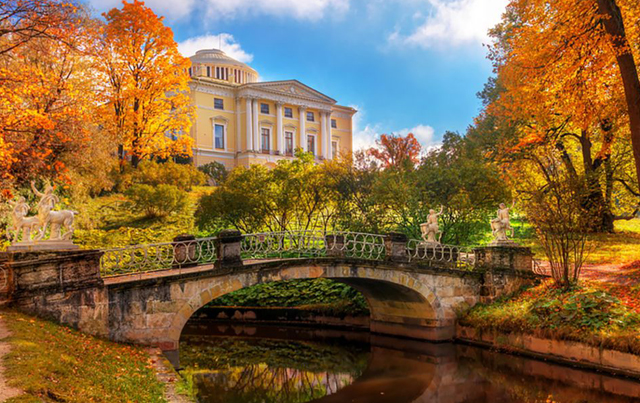 One of the pearls of suburb of St. Petersburg -Pavlovsky garden and park ensemble - a popular and traditionally visited place by tourists and travelers, located twenty kilometers from St. Petersburg. A fascinating tour of the Pavlovsk garden and park ensemble will tell you in detail about the history and the main attractions, such as the Grand Palace, Pavlovsk Park and the Church of Mary Magdalene.

In 1777 Paul I receives a gift from his mother (Catherine II) on the birth of a son (Alexander I), the former hunting grounds in the valley of the Slavyanka River. The construction of the Pavlovsk palace started only in 1782 and was very quickly finished in 1783. Parallely a very beautiful park ensemble was created, emphasizing the natural beauty of nature, instead of the previously popular crisp geometric layout. The park is one of the masterpieces of world fleet structure, since its creation was put the brilliant hands of Italian, English and Russian masters for fifty years.

The first structure was a church of stone, set in honor of St Mary Magdalene - patroness wife of Paul I - Maria Feodorovna, the founder of Pavlovsk. The temple, consecrated by Metropolitan Gabriel, keeps the icon of St. Mary Magdalene and St. Paul in splendor and elegant simplicity.

In 1788 Paul I gave Maria Feodorovna the Pavlovsk village - his wife by decree. It was later renamed as the city of Pavlovsk, and after his death Pawlowski garden and park ensemble became a favorite place of Empress.

In the first half of the twentieth century, after the revolution, Pawlowski garden and park ensemble became a museum, but during World War II suffered badly. The beautiful park was destroyed by the Germans during the retreat, plundered and they set fire to the yard. And only by 1978 it has been completely restored.

This is an interesting, and perhaps the most romantic excursion providing the perfect mood for adults and children upon exploring the magnificent Pavlovsk garden and park ensemble, enjoying the beauty of the landscapes.