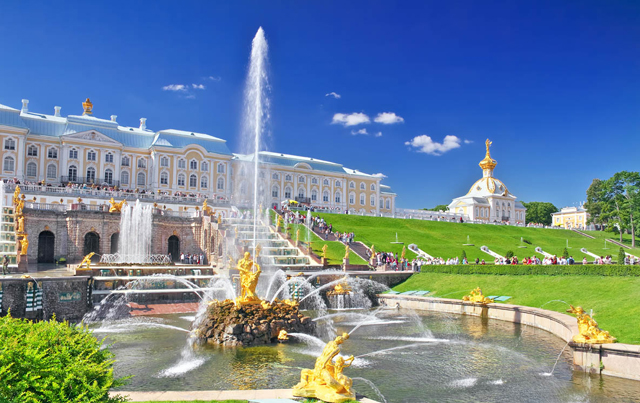 Once Peter the Great visited Versailles - the country residence of the French king Louis XIV. He liked it very much: a magnificent palace, a huge formal garden, pavilions, gazebos, sculptures. But most of all liked the Emperor Versailles fountains. So He decided to build not the same, but a better palace at home with parks and fountains. Within two years of founding of the Northern capital, he began to build his dream palace on the southern shore of the Gulf in a place called Peterhof. However, the most surprising thing in the fountains of Peterhof is not just their numbers or beauty, it is the way they work. It does not use water pumps or any electrical aids. The water is carried to the fountains by gravity.

The town lies on the shore of the Gulf of Finland. This is the third century Peterhof which amazes tourists with unique palaces, views, sculptures & grace. Of course the most important attraction of this town is the Grand Peterhof Palace. On the territory of the palace stretches Lower Park and the Upper Gardens. Lower Peterhof Park- is insanely beautiful sight. Regular park was built on the model of the residence of the French king Louis XIV. The park attracts viewers in many different fountains and small buildings. You will see Monplaisir, Ekaterinensky body, Marly Palace, Pavilion "Hermitage", as well as a special storage room and open-air cages. One of the most notable is dvortsov- "Monplaisir", as there are kept personal belongings of Peter I. Even the Emperor loved them more than anything. This palace is considered the "heart" of Peterhof, as the emperors continually conducted their receptions, dinners, important meetings.

Peterhof is known for the splendor of its fountains. This area was chosen precisely because of reservoirs, which still flow in the fountains of Peterhof delighting visitors. You can enjoy the beauty Merlinsky cascade "Gold Mountain" Lion cascade Menager fountains. Fountains Petergofa- is not just streams of water spurting out of the ground. It is something beatiful and certainly unforgettable.

This year, the closing of the 2016 summer season will take place on 17 and 18 September. "Holiday of fountains" will be held in honor of this. This is a very spectacular sight. As soon as darkness falls over the city, the presentation begins with multicolored fountain rays, lasers, lights, projections and pyrotechnic installations.