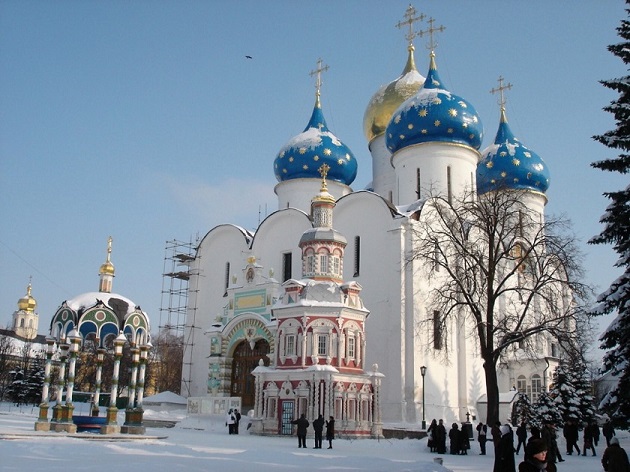 Trinity Cathedral Trinity Sergius Lavra - the unique historical object. The white stone Cathedral represents one of the few surviving examples of early-Moscow architecture. In addition, it is one of the few cathedrals where the iconostasis are painted by the greatest masters of icon painters - Andrei Rublev and Daniil Cherny.

Holy Trinity St. Sergius Lavra has always been under the support of Moscow rulers. Many a times the Russian army went our to fight invaders with the blessings of the abbot of Lavra monastery. The monastery is known for its opposition to the false King Dmitry II, who had besieged the monastery for nearly sixteen months. At this time the holy brothers prayed for the salvation of Russia at the relics of St. Sergius of Radonezh in the Cathedral of the Trinity Lavra of St. Sergius.

Tour of the Trinity Sergius Lavra tells you many other historical events of different ages, in which the monastery has played a crucial role. You also visit a number of beautiful Orthodox churches and enjoy the splendor of their decoration. Believer or not does not matter, a visit to the Trinity Sergius Lavra you will apreciate its true worth, because Lavra is a true pearl of the Orthodox world and architectural jewel of Russia. Among them are more than 250 monuments of culture, religion, history and architecture. Excursions to Sergiev Posad will be interesting to both adults and children. Sergiev Posad is also known for its "Toy Museum". The city was one of the centres of toy making. Excursion to Sergiev Posad will give you a unique opportunity to see the world-famous doll Sergievskaya Matreshka.