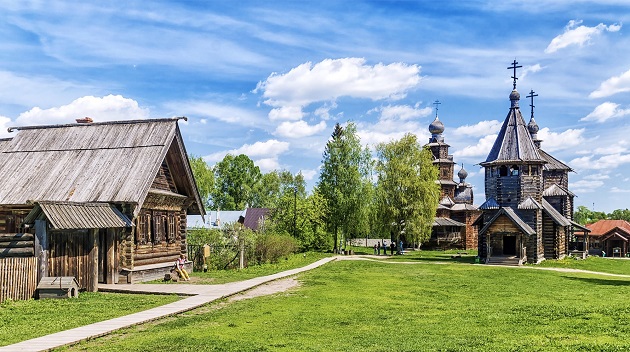 Suzdal - fabulously picturesque town in the Vladimir region, part of the Golden Ring of Russia. This open-air museum, where unique monuments are combined with natural splendor. Characteristic of Suzdal landscape - white stone Kremlin wall along the river and the sun shining on church domes in the frame of protected grasslands. In the city of 32 active churches and more than 150 monuments. There are no high-rise buildings and industrial buildings, and the air is clean and fresh. This is one of the ancient settlements, preserved to this day by its unique appearance.

The boundaries of the city remain unchanged since the 18th century.

Suzdal local architectural monuments are included in the UNESCO World Heritage List. See them and feel the Russian flavor which attracts tourists from all over the world.

Suzdal is mentioned in the oldest Russian books Novgorod Codex. And in the middle of the 12th century, during the reign of Yuri Dolgoruky, the city was the capital of the Rostov-Suzdal principality. Especially remarkable is that Suzdal is amazingly well preserved, and today travelers arriving here can feel the true history of the country.

Introduction to Suzdal is impossible without visiting its main attractions - the Kremlin, the Museum of Wooden Architecture and Spaso-Euthymius. Millennium white stone Suzdal Kremlin towers in the oldest part of the city - at the bend of the Kamenka River. The Kremlin complex includes Arhireyskie Chamber, St. Nicholas Church and the Church of the Nativity of the Virgin - one of the oldest in the city, from the pre-Mongol period. The old wooden buildings: houses, barns, mills and churches, surviving in the vicinity of Suzdal, all in one place - at the Museum of Wooden Architecture and Peasant Life. The architectural complex of the Monastery of the Saviour Evfimevskogo inscribed on the UNESCO World Heritage List. It presents museum exhibits and posted depository. The belfry of the monastery chimes several times a day enchanting its visitors.

In the city of 5 monasteries. Spaso-Euthymius, Basil, Rizopolozhensky and Alexander are next door to each other, within walking distance, and only Vasilyevsky is located on the eastern outskirts, near the bus station. Pokrovsky Monastery is known as the last abode of the representatives of aristocratic families. Wives were exiled here by Ivan the Terrible Vasily III and Peter I. Local churches stand out markedly unusual architecture - churches with concave tents are nowhere to be found but in Suzdal.. The most beautiful church in the city is considered to be the church of St. Antipy and the five-domed Cathedral of St. Lazarus in the Old Street.

Pride of the Transfiguration Cathedral - 16th century frescoes and paintings by famous masters of the 17th century and the Force by Savina Gury Nikitin.

In addition to excursions in Suzdal there are a large variety of master classes - you can learn to sculpt in clay bowl on a potter's wheel, a pretzel oven curled or weave baskets from birch bark. You can take part in a master class in painting murals in the icon workshop or learn to forge like a blacksmith. Very popular among foreigners are the classes on painting dolls and doll manufacturing.