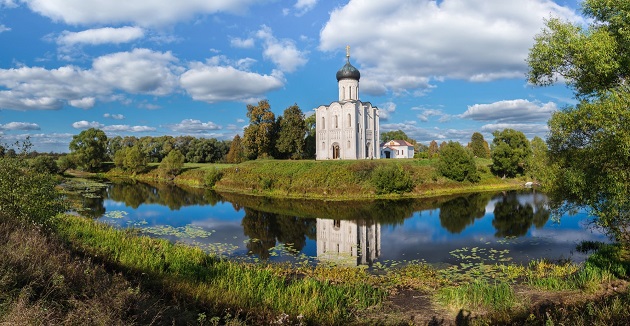 Vladimir - one of the most visited tourist cities of the Golden Ring: there remained some wonderful monuments of Russian medieval architecture of white stone. In particular this applies to the three sites included in the UNESCO list of World Heritage sites: Cathedral of the Assumption, Cathedral of St. Demetrius and the Golden Gate. But later the city construction of 16-20 centuries is also very interesting. In Vladimir there are so many beautiful churches, that they hardly can be viewed in a day; at least two days are mandatory to visit ancient church’s with frescoes.

Since 1783, the museum contained well known prisoners from Prince P. Dolgorukov and ending with Vasily Stalin, and even today the territory is still a prison.

For more than 250 years Vladmir was the capital of the ancient Russian state. Until 1432 Grand Dukes were crowned to reign in Vladimir Cathedral of the Assumption of the Blessed Virgin Mary. The city was founded in the late 10th century by Prince Vladimir of Kiev Svyatoslavovich soon after baptism.

Be sure to visit the Namolennye bright abode, where, engraved on every stone is the history of one century. For example, Demetrius Cathedral with its unique white-stone carvings of the 12th century, 500 plots with 2000 carved stones ... or the Christmas monastery - one of the oldest and largest in the Russian state. A lot has survived from the old buildings like the Holy Gate, and Christ-Church of the Nativity (17th century), monastic cells and hospital, house of Archimandrite. Today on the territory of the monastery is the residence of Vladimir-Suzdal Archimandrite.

A couple of temples draw attention primarily for its patrons. In particular, the Church of the Assumption of the Virgin was built in the 17th century at the expense of wealthy merchants Soms Denisov. A Church of Nikita the Martyr - is an example of religious architecture of the 18th century, it was built by the merchant Lazarev. And it is different from most churches due to its peculiar shape, resembling a palace more than a temple.

Finally, do not miss the Trinity Church, which is an exhibition of applied art - one of the most popular museums among tourists.