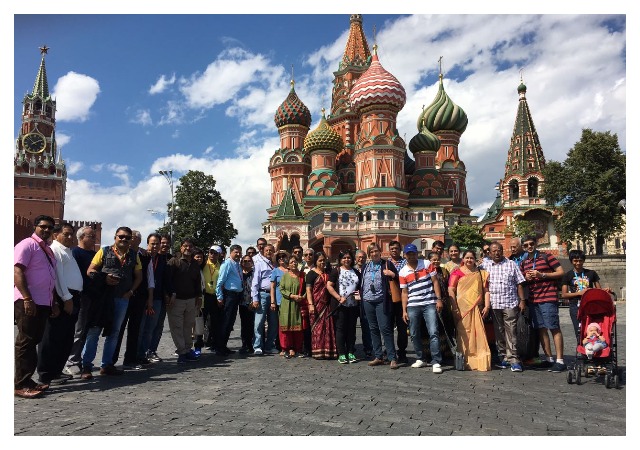 Russian Information Center in India (RIC) based on the opinion of the Consulate General of Russian Federation in Mumbai has issued Handbook on travelling to Russia for Indian tourists. Aiming at reducing stressful situations and misunderstanding in predominantly non-English speaking and non-vegetarian country, RIC creates a detailed list of Do(s) and Don't (s) for Indians travelling to Russia.

According to the Handbook that will be shared with tourism departments, tourism associations and all travel agencies, “the mentality and traditions of Russian and Indian people are similar in many ways - despite the significant difference in the lifestyles”. These differences, as well as language gap, according to RIC experts, often create unnecessary problems for both Indian tourists and tour operators in Russia for whom RIC has issued a separate guidance on working with Indian tourists.

Commenting on the release of the Handbook, Ekaterina Belyakova, head of Russian Information Center in India, said: “We have been working on promoting bilateral tourism between Russia and India for more than three years now, and have registered many cases of misunderstanding, concerns, that we’ve tried to address in this Handbook. We felt warning people about some cultural traditions, social norms and customs, sentiments, even tastes, especially when it comes to food, is very important”.

RIC’s Handbook for Indian tourists contains information and recommendations on how to go through immigration and passport control after arrival in Russia, how to take care of meals and where to find vegetarian options in Russia, how to behave with Russian authorities and common people and how to read their behavior, which is often misleading. “Smiling to strangers is not a part of Russian culture. Russians are polite and professional, and they do smile whole heartedly after they come to know you - which often takes time,” some of the Handbook’s guidance reads.

The set of advises also deals with situations often leaving Indian tourists in Russia outraged - such as, for example, paid toilets or paid water. “Drinking water is not free anywhere, like in other parts of Europe. You will have to buy small quantities which is expensive or stock up 5 liter cans available in product shops or hyper markets,” the Handbook says.

The guidance comes at the time when RIC is organizing a second FAM trip to to Moscow and St. Petersburg for Indian travel agents as a part of the ‘Indo-Russian Tourism Exchange’ initiative launched in February 2016 in Mumbai. The first such trip had been concluded successfully in April this year.

“As outbound tourism in India grows faster than that of China, India as a target market has huge and largely unrecognized potential for Russian tourism industry,” Paresh Navani, Managing Partner the Russian Information Centre says. “Russia has a lot to offer for Indian tourists, and it is not only beautiful nature or cultural heritage, but the warmth of Russian “chai” and Russian peoples, too”.

According to “India Outbound Tourism Market” report by Renub Research, out of more than 18 million Indian tourists travelled abroad 2015, only 30 thousand have visited Russia. Considering that by 2030 the number of outbound tourists in India may reach 50 million, Russia has a huge potential to attract more Indian tourists in future.

ABOUT RUSSIAN INFORMATION CENTER IN INDIA:

Launched in 2013 in Goa, Russian Information Center in India (RIC) today strives to build positive and cohesive relations between the citizens of Russia and India by promoting exchange of people visiting the respective countries. Since 2016, with the support of central and state tourism departments in Russia and India, RIC is running its ‘Indo-Russian Tourism Exchange’ initiative aiming at increase tourism flow between countries and exploring investment opportunities in tourism sector.

India Today: If Russia is in your travel plans, this brand new tourist handbook for Indians is a must-read

Business Standart: Why do Russians rarely smile? This tourist handbook has the answers